Ms Viloria, on behalf of all of OII, asks Secretary Clinton to include intersex people – some 4% of the world’s population – by extending hers, President Obama’s and the White House’s support for LGBT human rights to LGBTI human rights with full and equal intersex inclusion.

Intersex people do not have equality, human rights or protection against discrimination anywhere in the world and intersex genital mutilation, abortion and murder continue to be practised against intersex newborns, infants and adults. 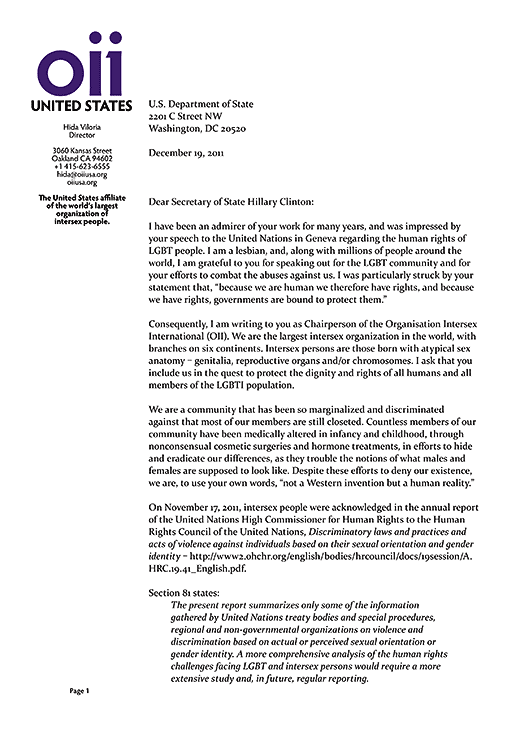 The text of the letter:

I have been an admirer of your work for many years, and was impressed by your speech to the United Nations in Geneva regarding the human rights of LGBT people. I am a lesbian, and, along with millions of people around the world, I am grateful to you for speaking out for the LGBT community and for your efforts to combat the abuses against us. I was particularly struck by your statement that, “because we are human we therefore have rights, and because we have rights, governments are bound to protect them.”

Consequently, I am writing to you as Chairperson of the Organisation Intersex International (OII). We are the largest intersex organization in the world, with branches on six continents. Intersex persons are those born with atypical sex anatomy – genitalia, reproductive organs and/or chromosomes. I ask that you include us in the quest to protect the dignity and rights of all humans and all members of the LGBTI population.

We are a community that has been so marginalized and discriminated against that most of our members are still closeted. Countless members of our community have been medically altered in infancy and childhood, through nonconsensual cosmetic surgeries and hormone treatments, in efforts to hide and eradicate our differences, as they trouble the notions of what males and females are supposed to look like. Despite these efforts to deny our existence, we are, to use your own words, “not a Western invention but a human reality.” 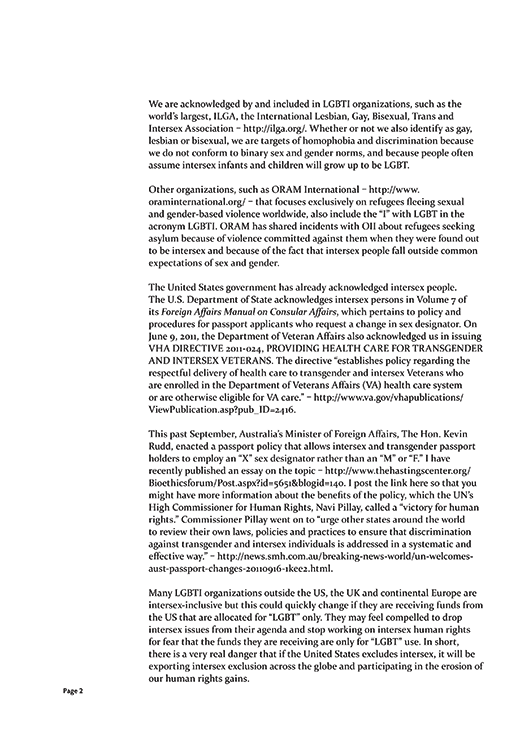 On November 17, 2011, intersex people were acknowledged in the annual report of the United Nations High Commissioner for Human Rights to the Human Rights Council of the United Nations, Discriminatory laws and practices and acts of violence against individuals based on their sexual orientation and gender identity – http://www2.ohchr.org/english/bodies/hrcouncil/docs/19session/A.HRC.19.41_English.pdf.

The present report summarizes only some of the information gathered by United Nations treaty bodies and special procedures, regional and non-governmental organizations on violence and discrimination based on actual or perceived sexual orientation or gender identity. A more comprehensive analysis of the human rights challenges facing LGBT and intersex persons would require a more extensive study and, in future, regular reporting.

We are acknowledged by and included in LGBTI organizations, such as the world’s largest, ILGA, the International Lesbian, Gay, Bisexual, Trans and Intersex Association – http://ilga.org/. Whether or not we also identify as gay, lesbian or bisexual, we are targets of homophobia and discrimination because we do not conform to binary sex and gender norms, and because people often assume intersex infants and children will grow up to be LGBT.

Other organizations, such as ORAM International – http://www.oraminternational.org/ – which focuses exclusively on refugees fleeing sexual and gender-based violence worldwide, also include the “I” with LGBT in the acronym LGBTI. ORAM has shared incidents with OII about refugees seeking asylum because of violence committed against them when they were found out to be intersex and because of the fact that intersex people fall outside common expectations of sex and gender. 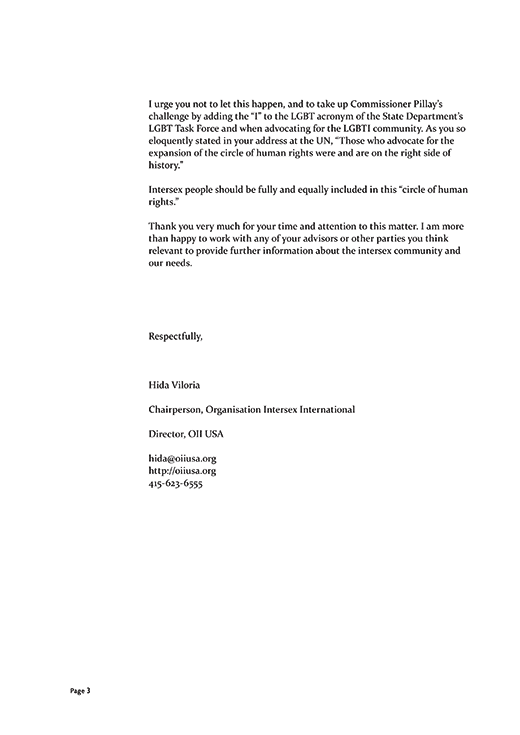 The United States government has already acknowledged intersex people. The U.S. Department of State acknowledges intersex persons in Volume 7 of its Foreign Affairs Manual on Consular Affairs, which pertains to policy and procedures for passport applicants who request a change in sex designator. On June 9, 2011, the Department of Veteran Affairs also acknowledged us in issuing VHA DIRECTIVE 2011-024, PROVIDING HEALTH CARE FOR TRANSGENDER AND INTERSEX VETERANS. The directive “establishes policy regarding the respectful delivery of health care to transgender and intersex Veterans who are enrolled in the Department of Veterans Affairs (VA) health care system or are otherwise eligible for VA care.” – http://www.va.gov/vhapublications/ViewPublication.asp?pub_ID=2416.

This past September, Australia’s Minister of Foreign Affairs, The Hon. Kevin Rudd, enacted a passport policy that allows intersex and transgender passport holders to employ an “X” sex designator rather than an “M” or “F.” I have recently published an essay on the topic – http://www.thehastingscenter.org/Bioethicsforum/Post.aspx?id=5651&blogid=140. I post the link here so that you might have more information about the benefits of the policy, which the UN’s High Commissioner for Human Rights, Navi Pillay, called a “victory for human rights.” Commissioner Pillay went on to “urge other states around the world to review their own laws, policies and practices to ensure that discrimination against transgender and intersex individuals is addressed in a systematic and effective way.” – http://news.smh.com.au/breaking-news-world/un-welcomes-aust-passport-changes-20110916-1kee2.html.

Many LGBTI organizations outside the US, the UK and continental Europe are intersex-inclusive but this could quickly change if they are receiving funds from the US that are allocated for “LGBT” only. They may feel compelled to drop intersex issues from their agenda and stop working on intersex human rights for fear that the funds they are receiving are only for “LGBT” use. In short, there is a very real danger that if the United States excludes intersex, it will be exporting intersex exclusion across the globe and participating in the erosion of our human rights gains.

I urge you not to let this happen, and to take up Commissioner Pillay’s challenge by adding the “I” to the LGBT acronym of the State Department’s LGBT Task Force and when advocating for the LGBTI community. As you so eloquently stated in your address at the UN, “Those who advocate for the expansion of the circle of human rights were and are on the right side of history.”

Intersex people should be fully and equally included in this “circle of human rights.”

Thank you very much for your time and attention to this matter. I am more than happy to work with any of your advisors or other parties you think relevant to provide further information about the intersex community and our needs.

Downloadable PDF of this letter to US Secretary of State Hillary Clinton: