FROM before it began as an organization OII Australia has been aware of the fact that intersex people will only gain equality and the end of intersex genital mutilation – IGM – through law reform. Begging medicine to play nice failed in the past and it continues to have little to no effect now.

Only legislative reform will ensure human rights, protection against discrimination, the criminalization of IGM and the penalization of those who murder intersex people of all ages.

We have been engaged in Australian law reform for quite some time, have a team of excellent legal advisors and have had to learn a great deal about the law and the language and procedures of the law. Thus we have some practical qualifications in commenting on aspects of law reform. Bear in mind though that our experience is with legal systems based on the British model. Napoleonic systems may be a different kettle of fish.

Lately some LGBTI human rights activists have been stating their desire for a whole new acronym to replace LGBTI, an acronym based on attributes used in law reform. Two such acronyms are being mooted – SOGI and SOGIB. 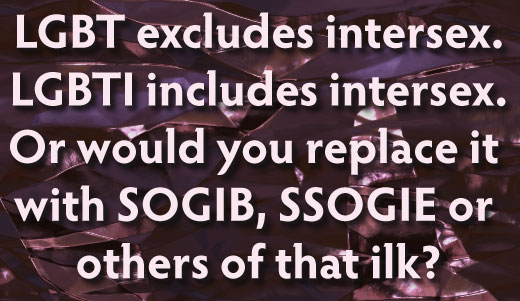 The Yogyakarta Principles do not include intersex although the word intersex is used once in the preface. The so-called “intersex paragraph” in the Principles themselves might be taken to refer to intersex genital mutilation but its existence has had no effect on ending this very common practice against intersex people.

OII Australia’s position on IGM is that it must be criminalized and its perpetrators prosecuted in the same way as the perpetrators of FGM – female genital mutilation – are. Only thus will the practice of IGM begin to come to an end.

SOGIB stands for “sexual orientation, gender identity, body” and is apparently being mooted as a way of including intersex via the word “body”. The problem with this idea is that a body is an object and not an attribute. Bodies have attributes but they are not themselves attributes.

Given that “body” is not an attribute the desire for it to be a third attribute cannot succeed. The same applies to a variation of SOGIB – SOGIBI – where the BI stands for bodily integrity but again there are problems with this idea. What is precisely meant by “bodily integrity” and how does it apply to a person whose body’s integrity has been already compromised by illness, disability, surgery, accident or voluntary modifications?

An intersex-inclusive attribute that works

One letter or a whole new acronym?

Experience tells us that taking the line of least resistance rather than overturning the whole cart and horse works best in some things. SOGIB, SOGIBI, SOGIBE and even SSOGIEB – which some activists are advocating to stand for “sex, sexual orientation, gender identity and expression, and body” – is a bit too much to expect of a public still digesting the meaning of LGBT.

Add I for intersex to LGBT and you have the comfortable addition of one letter to signify a large minority of the human population who have been ignored and excluded until now – the 1.9% to 4% of us who are intersex. Add sex to make “sex, sexual orientation and gender identity” and you have done the same thing by adding just three letters.

Through such apparently small actions, you have helped set in motion the last, great worldwide human rights movement of some of the most oppressed, most persecuted, most vilified, most stigmatized, most brutalized people on the planet, who have no equality, no human rights and no protection against discrimination anywhere (with the exception of South Africa) – intersex.