INFORMANTS of OII Australia’s recalled a Family Court of Australia case several decades ago where the marriage of an intersex was annulled on the basis that an intersex person cannot be legally married under the common belief that marriage can only be between someone who is seen to be 100% man and someone who is seen to be 100% woman. Our informants could not provide specific details, but we have finally tracked once such case down and have obtained the judgement document. 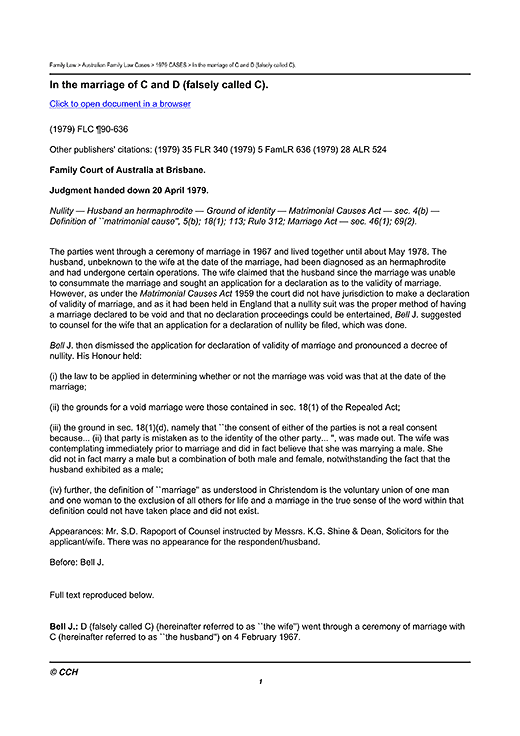 Family Court of Australia at Brisbane: In the marriage of C and D (falsely called C), Judgment handed down 20 April 1979.

We have sent this judgement document to one of our legal teams for analysis and commentary, but it appears that the judgement still holds in the case of other marriages involving one or more people born intersex regardless of amendments to the Marriage Act 1961 and other such Family Court of Australia cases such as Re: Kevin which involved the marriage of a man of transsexual background to a non-intersex, non-transsexual woman.

Amongst the reasons for the annulment being made and the principle still holding is this:

(iv) further, the definition of “marriage”as understood in Christendom is the voluntary union of one man and one woman to the exclusion of all others for life and a marriage in the true sense of the word within that definition could not have taken place and did not exist.

It should be noted that case law created in one country can be and is referred to and influences legal cases in other countries, as indeed has occurred in this one where reference was made to cases in England and Canada. The reverse can also occur, with Australian judgements affecting cases in the US, the UK and other nations with similar legal systems.

OII members wishing to obtain a copy of this judgement document should contact OII Australia via the Contact page in the footer below.