OII Chairperson Hida Viloria has received a reply from the US Department of State to her letter to US Secretary of State Hillary Clinton asking for full and equal intersex inclusion – under the acronym LGBTI and not intersex-excluding LGBT – in US foreign human rights efforts from now onwards. The reply letter was written by Michael H. Posner, Assistant Secretary for Democracy, Human Rights and Labor. 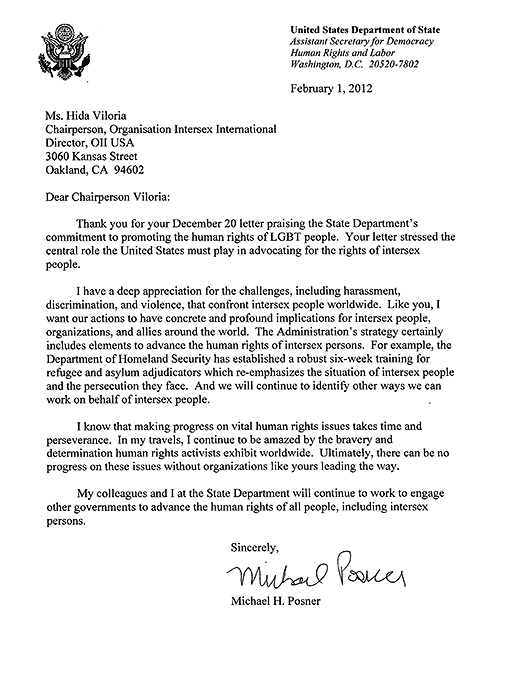 Reply from Michael H. Posner, Assistant Secretary for Democracy, Human Rights and Labor, US Department of State, to OII Chairperson Hida Viloria’s letter to US Secretary of State Hillary Clinton asking for full and equal intersex inclusion in US foreign human rights efforts.

Thank you for your December 20 letter praising the State Department’s commitment to promoting the human rights of LGBT people. Your letter stressed the central role the United States must play in advocating for the rights of intersex people.

I have a deep appreciation for the challenges, including harassment, discrimination, and violence, that confront intersex people worldwide. Like you, I want our actions to have concrete and profound implications for intersex people, organizations, and allies around the world. The Administration’s strategy certainly includes elements to advance the human rights of intersex persons. For example, the Department of Homeland Security has established a robust six-week training for refugee and asylum adjudicators which re-emphasizes the situation of intersex people and the persecution they face. And we will continue to identify other ways we can work on behalf of intersex people.

I know that making progress on vital human rights issues takes time and perseverance. In my travels, I continue to be amazed by the bravery and determination human rights activists exhibit worldwide. Ultimately, there can be no progress on these issues without organizations like yours leading the way.

My colleagues and I at the State Department will continue to work to engage other governments to advance the human rights of all people, including intersex persons.