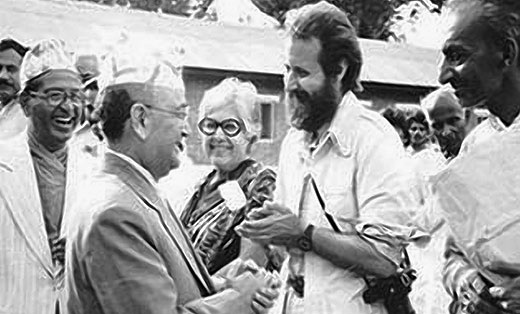 Please allow me to introduce myself. I am Diversity and Tolerance Spokesperson for Organization Intersex International – OII.

I was hoping to be able to attend this important conference, but as a disabled poor person, without the healthcare and support services to leave my home, it was impossible.

Why did I want to attend this conference? I have never self-identified as a lesbian, gay, bisexual or transsexual, so what is my interest in this White House LGBT Conference on Health? It is because during my life as a late-virilizing intersex person, I have been misunderstood as, and persecuted as, at various times a lesbian, gay man, bisexual and transsexual.

Legalized, systemic homophobia and transphobia for being intersex

So, I have been a victim of various kinds of legalized and institutionalised homophobia and transphobia all of my adult life. And, as an intersex person, even in America, I have been denied appropriate healthcare, legal recognition and basic human rights.

I have had to fight to get a legal presence and a birth certificate that is congruent with my adult naturally-virilized masculine gender. My entire life has been one great battle just to be myself because there is no legal recognition for the millions of intersex people like me in this great country of ours! There is no recognition of the existence of intersex people even in the email sent to me about this LGBT conference!

See the 1982 Royal Nepalese Press Photo of me at the top of this letter. I am the taller bearded man near the center of the picture. Do I look like a normal woman to you? I was born looking like a normal baby girl but by the time I was a young adult my body had self-virilized, becoming hirsute and phallic. This natural late-virilizing intersex change was welcomed by me, because I always thought of myself as male and started calling myself David at the age of nine.

No place for intersex people in America?

But tragically for me, although there were surely countless more intersex people of various kinds in the USA, when I was a young adult there was no appropriate legal, social or medical-care place for me or for any other intersex person in America. This situation interfered with my life in every possible way, and exposed me to many dangers, abuses, deprivations and hardships that a “normal” male or female would never have encountered and could not imagine.

What has changed since my youth 40 years ago? Nothing. We intersex people still have no proper legal presence here! In fact, under the Real ID Act we face horrendous problems just to get the basic legal presence that we need to get a driver’s licence or a job.

Each state has different rules for how a person is sex-assigned at birth and what is put on their birth certificate. Most states do not change a birth certificate to correct the erroneous sex-assignment of an intersex baby. This means that in some of these states the only legal and medical path available for an intersex person to get their birth certificate corrected is to claim that they are transsexual and to have their bodies surgically and hormonally altered to meet some binary “sex change” criteria of the state.

This procedure carries enormous and sometimes life-threatening implications for the intersex person who, having declared themselves to be transsexual, may then be denied appropriate health care access on that basis. Under the superstitious, transphobic Real ID Act, getting proper legal documentation for ID like a driver’s licence has become a nightmare for some intersex people. It certainly was for me.

Another major issue for intersex people is the insurance industry and Medicare and Medicaid-related standards of care, which are written and paid-for exclusively for either males or females, leaving intersex people literally dying because they cannot get the necessary health care that is relevant to their unique physical needs.

For example at the age of 25, after my legally-required, one-day insurance-covered hospital admission for multiple surgeries I had no post-surgical appropriate follow-up care. I underwent a complete mastectomy and hysterectomy with removal of the cervix and vagina too.

As I had then become a man as a result, the insurance company would not pay to treat the sequelae of these surgeries. Years later, when I became too disabled by post-polio syndrome to work any longer and needed medical assistence, again there was no appropriate medical care available to me as an intersex person. I could either get care for a male, or care for a female, but I could not get care for a person with both male and female parts, or related intersex surgical sequelae.

So the healthcare access and appropriate quality-of-care problems of intersex Americans are many and complex and can be life-threatening as well as severely impacting a person’s quality of life and their ability to be a fully contributing member of the American adventure.

For example, I am a highly-educated person who started out with a bright future in my interdisciplinary field of history of religion research. However, unfortunately for me, most of my life has been wasted by the severe disability that I suffered due to years of undiagnosed and untreated life-threatening post-polio syndrome.

Because I was wrongly identified as some kind of an LGBT person and thus stigmatized by uneducated and maleducated, homophobic doctors and other medical professionals, I could not get a proper diagnosis and treatment for my life-threatening post-polio problems until I had so much low-oxygen damage and respiratory function deterioration with secondary cardio-vascular problems that I ended up in a nursing home on a respirator for comatose people.

Thus I went from a young tax-paying scholar with a bright future to a bed-ridden respirator-dependent invalid, all because I could not get appropriate and timely healthcare as an intersex person, here in America.

A naton’s people are its greatest natural resourse. People empowered to contribute their best, make a country strong and vibrant with the offerings of their unique giftedness. How does it serve our nation to let LGBTI or intersex citizens die, or become disabled and disempowered by their legal and medical neglect and abuse?

My demand for intersex equality and intersex rights

I am making a demand, not a request. I demand, on behalf of all intersex Americans, that we federally be given legal status equal to that of males and females, a status which recognises our right to appropriate healthcare, our right to marry and our right to enjoy the very same human rights and responsibilities as every other male or female American.

Among these rights should be our right to keep our genitalia intact until we are old enough to decide what we want to do with our own body parts.

At present, there is no protection for the bodily integrity of intersex babies and children who are routinely subjected to sex change surgeries which deprive them of their right to self-determination by arbitrarily forcing a surgical “sex” on them, before they are even old enough to be potty trained!

It is tragic enough that parents are now routinely counselled to abort intersex babies but what is done to surgically “fix” them when they are born is another horrendous assault on their humanity! We intersex survivors of this eugenics-inspired attempted genocide demand that present and future intersex people be recognized as a legal class, no less than males or females, who have the same rights, including the right to determine whether we keep our gonads and genitalia or not. Even as an adult I was required to have my female organs, including my androgen-producing gonads, removed to get a driver’s licence that said male to match my hairy face.

So, both intersex infants and adults are forced, in America today, to have surgeries for legal and social reasons that have nothing to do with their health or desired life. This barbaric treatment of intersex people is rooted in homophobia and fearful religious superstition.

We are not evil creations of the devil and threats to the natural or moral order of our nation and the universe! We are a normal, rather common part of the natural order and just as capable of being good tax-paying, contributing citizens as anyone else. It is far past time that we intersex people had a seat at the American Family Table too. We are not ashamed to be who we are, and we will not allow others to continue to shame us into secrecy, invisibility and silence anymore.

Thank you for taking the time to read this letter. 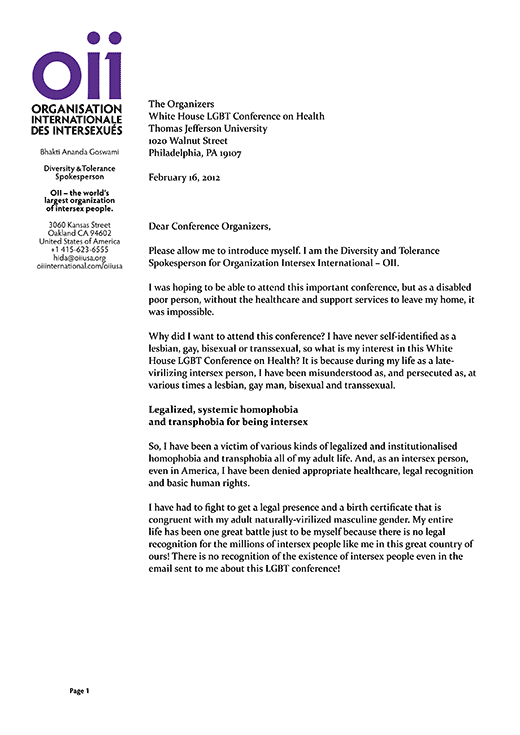 Letter by Bhakti Ananda Goswami, OII Diversity & Tolerance Spokesperson, to the organizers of The White House LGBT Health Conference, pleading for intersex Americans to be included in health and other human rights reforms efforts.