U.S. Citizenship and Immigration Services, may we respectfully suggest that, when preparing officer training materials like your RAIO Directorate – Officer Training RAIO Combined Training Course module named Guidance for Adjudicating Lesbian, Gay, Bisexual, Transgender, and Intersex (LGBTI) Refugee and Asylum Claims, you might wish to seek advice from a range of intersex organizations rather than just one organization of any kind? 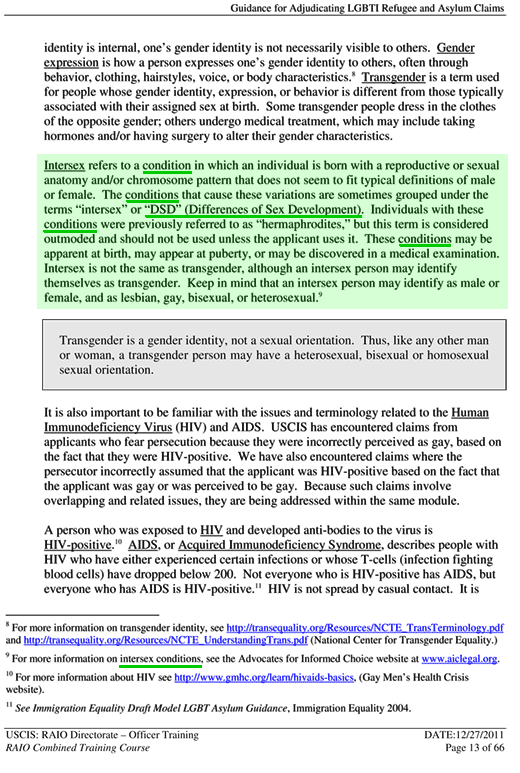 For example, we recommend consulting with intersex organizations whose membership is all intersex, that are global and have a close, firsthand understanding of the conditions for intersex people in countries outside the United States. Organisation Intersex International fits that description by virtue of its many national affiliates located in countries in all continents except Antarctica.

From the evidence of this guide it appears you may have been persuaded that a range of natural biological variations in sex – intersex – are somehow medical “conditions”. Intersex is more common in humanity than popularly believed and it and hermaphroditism are even more prevalent in the rest of nature.

Perhaps we could compare intersex to other not uncommon natural variations such as having dark hair, brown eyes or being of short stature. Humanity’s current ideal may consist of blue eyes, blonde hair and stature approaching 6 feet but that image of perfection generally does not persuade medicine into imposing it upon human bodies against the will of the inhabitants of those bodies. Yet medicine seems convinced it has the right to impose its image of the perfect male or female genitals upon the bodies of intersex newborns. This is done through surgery and enforced hormone treatment and is often referred to as intersex genital mutilation – IGM.

Your training module consistently uses variations of “intersex conditions” thus positing intersex as something to be subjected to medical treatment. Yet you seem aware that being gay or lesbian was also long thought of as an “illness” to be “cured”:

The use of the term homosexual is limited in this module. It has a somewhat derogatory connotation within the LGBTI community as it has historically been used in a medical context to describe being gay or lesbian as an illness.

So please, take our word for it that describing intersex as an illness, which is what calling it a “condition” is doing, is equally offensive, even dangerous to our health and wellbeing. Renaming intersex as DSD – the coiners of this term actually meant it to be Disorders of Sex Development and heavily promote it is as such – is the medical industry’s rubber stamp of the intersex-as-disease-to-be-cured belief system.

Intersex refugees are escaping many forms of persecution that are motivated by homophobia and that are common to all mistreatment of LGBTI people such as social shunning, refusing an education, the denial of the means to earn a living, violence of all kinds and murder.

IGM is peculiar to intersex people alone, and it goes on all over the world, in the so-called global north as well as the global south.

For example, at the age of 17 German intersex woman Christiane Voelling woke up from an operation to discover that her surgeon had decided to remove her female reproductive organs without bothering to consult her first. That is not an uncommon occurrence and has occurred to infants through to people in their twenties or older.

OII members have firsthand experience of these abuses

Members of OII have been subjected to forms of IGM either as a condition for having their legal documentation corrected to reflect biological reality or have been misinformed about the surgery they had been convinced they had no choice but to undergo – “If you don’t let us do this your life will not be worth living and nobody will ever love you.”

Under the subheading “Beatings, Torture, and Inhumane Treatment” you state that “Many LGBTI people are subjected to severe forms of physical violence.” The UN Committee Against Torture sitting in Germany recently considered the case of intersex people in that country being subjected to intersex genital mutilation and recommended the establishment of “measures of redress and compensation” for intersex victims of that severe form of violence against one’s dignity, human rights and bodily integrity.

To your credit, you do recognize the very real fear of IGM and other nonconsensual medical treatment:

Further along in the training module refugee asylum officers are provided with a number of questions for people with “intersex conditions” including “Have you ever received medical treatment for your condition?” Again, you appear to be collaborating with the intersex-as-disease-to-be-cured ideology that is and contributes further to common, fundamental violations of intersex human rights.

We hope that your officers are not expecting intersex refugees to “prove” they have a medical “condition” that they are expected to have “cured” by a “a doctor or other medical professional”. This question and others need clarification as to intent and possible answers.

On the other hand you commendably recognize that lack of client-centred medical care for intersex people can be a problem and a very real cause for seeking asylum too. Under the “doctors knows best” ideology promulgated by the notorious Dr John Money and his many true believers, intersex people are expected to submit to the gender assignments imposed upon them as newborns by self-appointed “experts” and are often refused the medical assistance they need to live as themselves, in the West as well as the rest of the planet.

An attempt at intersex inclusion that needs more work

While this training in general is rather good and certainly to be commended, its intersex content is contradictory and uncertain. We request that you consult with Organisation Intersex International in its, we hope, imminent, revision so that we can give you the full and multinational picture on intersex, the one that recognizes the facts about intersex unsullied by ideologies created by our persecutors.

We ask you to be fully cognisant that enforced surgery and other nonconsensual medical “treatment” for being intersex is a very real threat to intersex people not only in their nations of origin but also in the their destination, the United States of America and countries they have passed through along the way.

As ever, we are glad to help

We have members in the United States of America, in our affiliate OII United States, as well as others around the world who are pleased to help. Please contact us via our US affiliate or via the Contact form on this website.

According to Immigration Equality, the guidance is the result of a two-year collaborative process between the organization and USCIS. In a statement, Victoria Nelson, Immigration’s Equality’s legal director, called the module an “important step to better protect LGBTI asylum seekers.” …

Grace Gomez, a straight Florida-based-lawyer who aids LGBT asylum seekers in the United States, said the guidance is a “good step” because it recognizes the issue, but more work is needed to assist LGBT people seeking asylum in the country.

“It’s good that they’re recognizing it, but it’s just guidelines,” Gomez said. “It’s not putting anything into actual law, or into effect. … It’s a step in the right direction, but it’s not enough. It’s a Band-Aid on a gushing wound, if you put it that way.”