WE had hoped to comment on the proceedings of Wednesday March 7, 2012 a little sooner than now. We have been attempting to obtain a full transcript of the proceedings at the United Nations Human Rights Council discussion titled Human rights, sexual orientation and gender identity but one was not forthcoming.

Instead, ILGA – the International Lesbian, Gay, Bisexual, Trans and Intersex Association – has stepped into the breach and has our thanks. 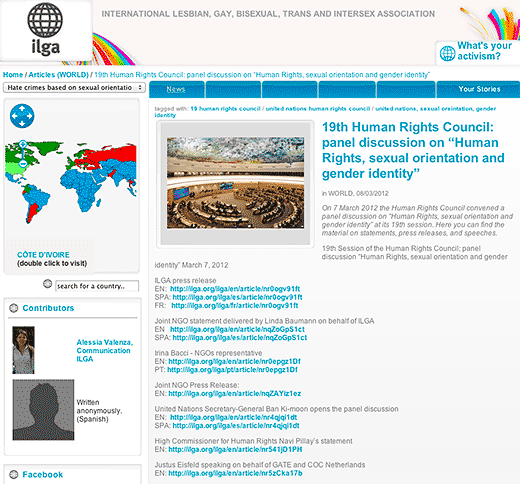 Given the time that passed since last Wednesday, and the volume of commentary that other venues have already published, we won’t reiterate what has already been said before. Instead, let’s look at the intersex inclusion that occurred – it may gauge what further work needs to be done on intersex human rights.

Intersex – some notes before starting

First though, some background notes on intersex.

Intersex inclusion in the speeches and media releases

And in hospitals and other healthcare facilities, where discriminatory attitudes are also present and where transgender and intersex people are especially poorly served.

Distinguished panelists, I am honoured to address this panel on behalf of ILGA, which represents 917 lesbian, gay, bisexual, trans and intersex member organisations.

I have the honor to address myself to this Council as a human rights activist, civil society representative on this panel to share our struggles for human rights of persons whose expression, identity or behavior do not conform with the dominant norms, ie, lesbians , gays, bisexuals, transsexuals, transvestites and intersex, that throughout my speech shall call LGBTI.

ILGA – International Association of Lesbian, Gay, Bisexual, Transgender and Intersex, in its most recent annual report on laws and regulations that restrict the fundamental rights of LGBTI people still reports that in 76 countries there are laws that criminalize consented sex between adults of the same sex.

Another situation of violation to be mentioned are the surgeries performed in very young children to “gender adjustment” of intersex people.

Justus Eisfeld speaking on behalf of GATE and COC Netherlands

Justus Eisfeld did not mention the word intersex at all nor did he use intersex-inclusive acronyms or attributes formulae.

Today some delegates of countries defending laws persecuting LGBTI people abandoned the room as the panel convened by the Human Rights Council began its discussion on violence and discrimination against lesbians, gays, bisexuals, trans and intersex people.

What did we learn about intersex here?

If we were viewers or participants unfamiliar with intersex, we would have learned that very young intersex children are subjected to “gender adjustment”, that intersex people are “very poorly served” in hospitals and medical facilities and experience “medical abuses”.

That does not sound too bad. Intersex people seem to be treated rather well in fact, compared to the rest of LGBTI as described in the speeches above. “Gender adjustment” even sounds somewhat benign, perhaps something like counselling in how to be a good boy or girl.

There was much more said during the panel discussion on Human Rights, sexual orientation and gender identity than reported above and several more speakers too. The video of the whole session is of three hours’ duration. Further links are below.

The session was chaired by Laura Dupuy Lasserre – President of the Human Rights Council, and moderated by Abdul Minty – Permanent Representative of the Republic of South Africa.

Jacqueline Kasha ended the session by making a statement on behalf of African LGBTI organizations – note the inclusion of intersex which is almost the default setting outside of Europe, the UK and the US.

The session was very much to do with human rights and its setting was the UN Human Rights Council, so the inclusion of intersex implies that intersex people have human rights issues in common with the rest of LGBTI. Unfortunately the nature and extent of the human rights problems intersex people experience have been made to look relatively small, limited to something called “gender adjustment” and mistreatment by the medical system.

“Gender adjustment” is a newly-coined euphemism for intersex genital mutilation – IGM – and it deflates the horror of IGM, the offence against human rights that mutilating children’s genitals without their consent represents. Imagine if another form of infant genital mutilation had been spoken of in that manner, female genital mutilation – FGM. If FGM were to be renamed, say, “sensitivity adjustment” would there be such a justifiable hue and cry against the practice as there has been and that has led to its criminalization in so many countries now?

By focussing on intersex as a phenomenon of childhood and medicine, the UNHRC discussion has infantilized and medicalized intersex, effectively diminishing and deflecting the bigger picture of intersex oppression. The United Nations’ apparent support of the medicalization of intersex might be seen as lending credence to the position of those who medicalize intersex at the expense of fundamental human rights including the right to life.

We remind the United Nations and our fellow ILGA members that there is a great deal more to the worldwide persecution of intersex people than infantilization and medicalization, as bad as those  things are.

We have no human rights and no protection against discrimination anywhere in the world, with fewer rights than LGBT people. South Africa is the sole exception but even there intersex human rights are currently incomplete.

We ask the United Nations to consider intersex human rights fully and equally on a par with the rest of the LGBTI community, the community that is persecuted due to homophobia.

The UN needs to expand its human rights remit to LGBTI and “sex, sexual orientation and gender identity” in order to clearly and obviously include intersex people. We thank everyone who organized and attended the UNHRC panel discussion Human rights, sexual orientation and gender identity for including intersex but request that intersex become an equal concern with the rest of LGBTI lest we be placed in the role of perpetually playing catch up.

Intersex people are 1.9% to 4% of the human population world-wide.