IT has been said that one can count the number of LGBTI, not LGBT, events in the United Kingdom on the palm of one hand. That may well be true. The recent LGBTI event at the House of Lords is certainly the first instance we have seen where the word intersex has been associated with Parliament in any way. 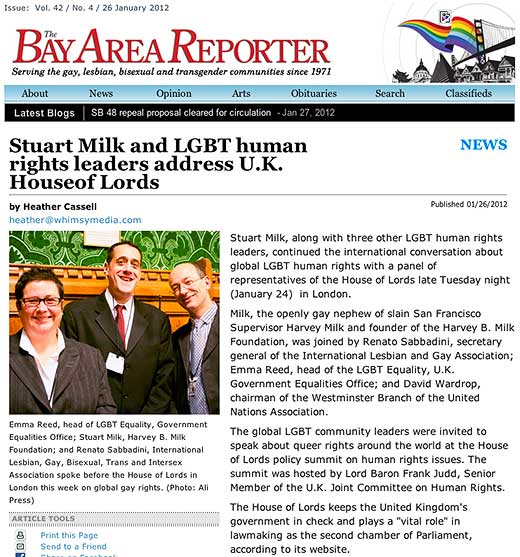 Despite the Bay Area Reporter’s portrayal of Human Rights for Sexual Minorities: Is the UN the right forum to campaign? as an LGBT event, it was most certainly intersex-inclusive and LGBTI. It would be terrific, and an embodiment of truth in reporting, if LGBT or LGBTQ magazines like BAR actually reported the facts instead of reshaping what happens to suit their own agenda. Intersex silencing, exclusion and erasure are killing intersex people and damaging our lives, and misreporting is a contributor to that.

Two out of three speakers at the event were intersex-inclusive – Stuart Milk of The Harvey Milk Foundation and Renato Sabbadini of ILGA, the International Lesbian, Gay, Bisexual, Transgender and Intersex Association. Both used the intersex-including acronym LGBTI. The issue of intersex invisibility in the UK was raised.

We hope to publish a report from an intersex activist who attended the House of Lords event in due course.