OVER at the Open Society Foundation, Lydia Gutermnan asks the question “Why Are Doctors Still Performing Genital Surgery on Infants?”

The answer is simple – so long as journalists, doctors, commentators, bioethicists, parents, erstwhile allies and intersex people ourselves continue to pretend that intersex is a “condition” or a DSD then doctors will continue to cut up intersex genitals without our consent. 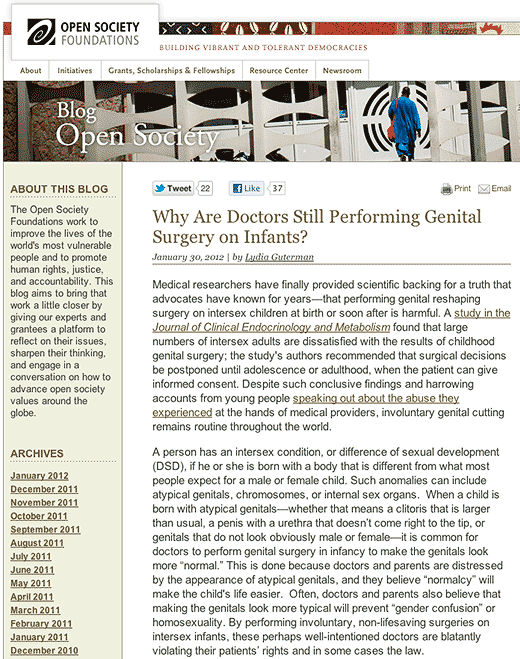 Ms Guterman may as well have asked why are doctors still performing their job? We are constantly dismayed that people cannot see the fundamental logic beneath all this. If you describe something as an illness, then medicine will attempt to provide a “cure”. Language describing intersex as a “condition” or a “disorder”, even as a developmental difference is no different to labelling it as a disease, a sickness or an illness.

Having done so, how do you think that doctors feel obliged to repsond? By getting out their needles and their knives and the rest of their panoply of medical treatments to offer them up in your service. To perpetrate intersex genital mutilation – IGM – upon intersex bodies and lives.

We call on everyone who apparently unthinkingly applies the language of medical conditions, of the disease model of intersex, to stop and think before opening their mouth.

There are more truthful words and phrases to use instead of “condition” and the like.

So please, may we suggest using the word variation instead? We do. Intersex variations – isn’t that so much better?

One thing we know for sure is that the word variation does not cause doctors armed with needles and knives to go rushing at an individual with some variation in order to “cure” them of it.