THE LGBTQ Reducing Disparities Project has an online survey running until January 18, 2012. The survey is open only to residents of California, whether they are located in that state at the time of filling in the survey or not. 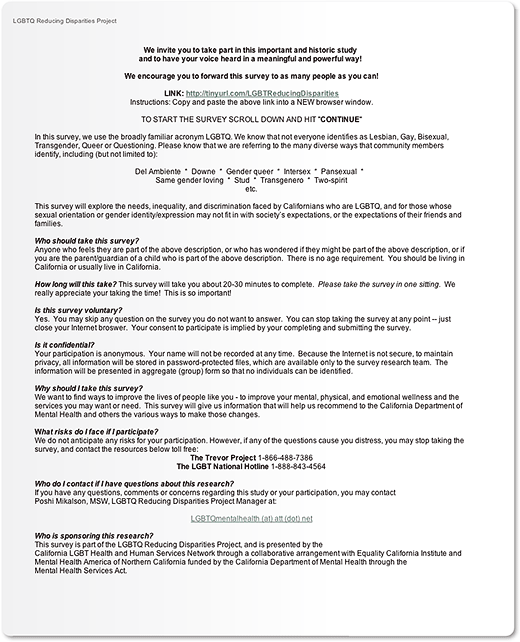 A note to the LGBTQ Reducing Disparities Project administrators:

We suggest to the survey organizers that they consider publicly signalling their inclusion of intersex by using the intersex-inclusive acronym LGBTQI or LGBTI instead of the intersex excluding acronyms LGBTQ and LGBT.

If you write LGBT or LGBTQ then you are sending a loud and clear signal that intersex is not included. It really is quite simple.

From the survey introduction page:

In this survey, we use the broadly familiar acronym LGBTQ. We know that not everyone identifies as Lesbian, Gay, Bisexual, Transgender, Queer or Questioning. Please know that we are referring to the many diverse ways that community members identify, including (but not limited to):

This survey will explore the needs, inequality, and discrimination faced by Californians who are LGBTQ, and for those whose sexual orientation or gender identity/expression may not fit in with society’s expectations, or the expectations of their friends and families.

Who should take this survey?

How long will this take?

This survey will take you about 20-30 minutes to complete. Please take the survey in one sitting. We really appreciate your taking the time! This is so important!