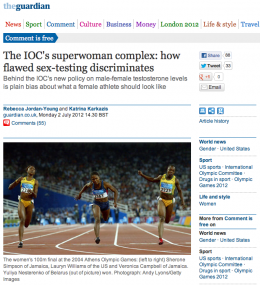 Rebecca Jordan-Young and Katrina Karkazis have another article on IOC sex testing today, in The Guardian:

Last week, the International Olympic Committee (IOC) quietly dropped what may prove to be a bomb in the middle of the already explosive question of who can compete in women’s events in the 2012 London summer Games. The new sex-testing policy threatens to ban women whose bodies produce high levels of testosterone, what medicine calls hyperandrogenism…

Since their performances are not unusual, what is the problem? These women aren’t cheating; they have introduced nothing foreign into their bodies. The key is probably that too many people view testosterone as foreign to women’s bodies and a lot like doping. Doping with steroids does increase performance.

But having naturally high levels isn’t like doping. A serious look at who has been targeted for “suspicion-based” monitoring of sex shows that it isn’t extraordinary performance that makes these women suspect – it’s vulnerability to charges that they “look masculine”.

“The IOC’s response was that other differences do not call the athletes’ status as male or female into question. The real issue is not fairness, but that certain athletes are not accepted as real women because of their appearance.”